After an uneventful flight, I arrived in St Petersburg, picked up my bags and proceeded to look for  my driver.  There he was with my name on his card and off we went into a warm sunny day in  St. Petersburg. 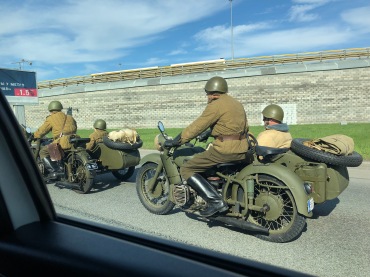 The drive was approximately one hour, mostly because it was rush hour and there was lots of traffic including these three World War II motorcycles with sidecars and soldiers dressed in the uniform of the day.  At first I thought OMG, they aren’t still using this old equipment, followed quickly by realizing they would be part of the May 9 Victory Day celebrations the following day.

My driver was a hoot.  He spoke very little English, but produced a mouth organ and proceeded to serenade me with everything from opera to Kalinka, Russian National Anthem, US National anthem, Happy Birthday and many more tunes, and I sang right along with him if I knew the words.  I thought a couple of times we were going to smash right into the car ahead, but no we made it safely to the hotel.

The next day  – May 9 – was Victory Day in Russia celebrating their victory over Nazi Germany 1941-1945.  In Moscow there were huge parades and a show of military strength, but here in St. Petersburg, they had one marching band and lots of old tanks and military vehicles from the last war – even the motorcycles I saw on my way from the airport. 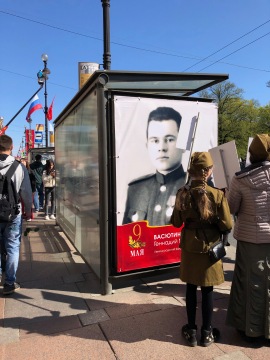 There were dignitaries in swank cars, but the most moving were the thousands of families marching along carrying photos of loved ones who were lost during the war.  They ranged in age from babies to very old men and women silently moving along the parade route.

They say 27 million Russians died during that time, and that there is hardly a family who did not lose at least one member.  After the marching band, music blared from loud speakers in the street and the people just kept coming and coming.  Some were dressed in costumes from the areas they came from. There were children dressed in “army” uniforms and you could buy flags and “soldiers” khaki hats in the streets.  But for the most part it was just ordinary men, women and children out to honour someone they lost in the war.  It was solemn and festive all at the same time, and personally I thought it was a lovely way to honour the fallen.  By the way, Putin was in Moscow.