“First I am Sicilian.  Second I am European.  Third I am Italian”

Someone told me this quote was attributed to Goethe, but I was not able to confirm this. However,  from my observations this seems to be a true statement about the Sicilians.  They are very proud of their history which is long and varied.  They live on the largest island in the Mediterranean. They are autonomous and quite separate from the rest of Italy and they have their own dialect.  Perhaps because they are not part of the mainland, or perhaps because over the centuries Sicily has been dominated by many different and diverse cultures, they think of themselves differently.

Sicily is located just off the “toe” of Italy’s boot, with the Mediterranean, Ionian & Tyrrhenian Seas touching its shores.  Palermo is its capital city, and our tour took us around the whole of the island starting in Palermo. Then….   Monreale. Cefalù. Segesta. Marsala. Erice. Trapani. Agrigento. Villa Romana del Casale. Syracuse. Otigia. Modica. Ragusa. Scicli. Mount Etna. Taormina, and ending with a departure from Catania.   It was a whirlwind of new experiences with sights, sounds and tastes to fill the senses.  The Sicilians are the friendliest people and welcomed us every where with a smile and Buon Giorno or Buona Serra!!  Of course, the food and wine was delicious.  I think our little art group has morphed into a gastronomic body with more focus on the deep red of a great wine or the rich brown and aroma of freshly made chocolate sauce rather than whether the old wall is a true ochre or the sea is a cerulean blue.

My first impressions of Palermo were of a city that looked run down with a mix of old and new buildings and no rhyme or reason to how they were placed where they were.  I found out along the way that you could build anything anywhere, with or without a permit, if you knew how or who to pay off.  Yes, the Mafia, or organized crime.   I also found that people do not like to talk about the Mafia and my feeling is they are trying very hard to get out from under their influence, at least in Sicily. 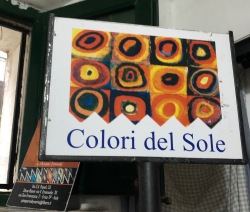 Colori del Sole – colours of the sun – is a business registered with “Addio Pizzo” an Anti-racket Association.  It is a guarantee that the products are made in Sicily, and when you see their sign in the shop windows, you know these businesses do not pay money to organized crime, and you are encouraged to shop with these businesses.  Is it working?  I don’t know.  But I think it is certainly gutsy.

The highlight in Palermo, besides its beautiful Opera House, (where the Godfather shot his daughter on the steps),  was a visit to the puppet theatre.  Opera dei Pupi represents the battles between Saracens & Christians in the middle ages.  The puppeteers are standing above and it is amazing what they can make those puppets do evoking adventures and tales of epic knights and heroes.    The “plays” are based on old stories and convey ideals which are dear to the Sicilian people – chivalry, honour, justice, faith & love.  They continue like a soap opera the following night.  Unfortunately it was all in Italian, but enjoyable nonetheless.  Another thing to look for in Palermo are the Coppola hats.  They come in a variety of materials and colours, some sparkly, some sporty and worn at a rakish angle.

Nearby Palermo is the Duomo located in the town of Monreale.  The Duomo is a marvellous example of Medieval art, where Byzantine elements come together with Arabic and Norman.  It was built in the late 1100s by William II and is mostly in its original form.  It is massive and inside you will find the most beautiful mosaics covering almost the entire surface of the walls and floors. 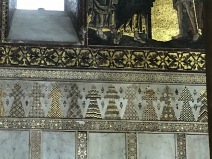 You can understand the quote at the start of this blog when you learn that Sicily goes back to the 11th Century BC, and over the years has been ruled by various  tribes and cultures and only became part of Italy when Garibaldi drove out the Bourbons in the 1860s.

Sicily’s name comes from three Bronze Age tribes that settled the island starting in the 15th Century BC.  The Sicani from the region we call the Balkans.  The Elymians from the Aegean, and the Sikel from mainland Italy.  Over the centuries, Sicily was ruled by the Phoencians, the Greeks, Romans, Vandals, Byzantines, Arabs, Norman, Holy Roman Empire, Angevin, Aragonese, Savoy, Austrian Hapsbergs, Bourbons and finally Italy. 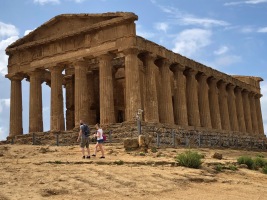 However, it was the Greek influence that left the strongest presence on Sicily.  I was surprised to find Greek ruins that are remarkably well preserved.  Who knew? And the mix of Roman, Baroque, Greek, Byzantine, Norman architectures make this island a fascinating area to visit.

The Villa Roma de Casale near Syracuse is a beautiful piece of Roman architecture and art, and because of a flood causing a mudslide, it was buried and thereby most of it was preserved.  During the war, we were told the Americans somehow knew it was there and it was protected and not bombed.  Today it gives one the opportunity to see how the rulers lived back then in beautiful rooms with frescos on the walls and exquisite mosaics on the floors.  It was fascinating to see the “bikinia clad girls” showing piercings on their belly buttons and wearing makeup.  Interesting considering  this mosaic art was created between the end of the third century and the beginning of the fifth.  The mosaic artwork through the buildings is magnificent and tells a wonderful story of life at the time in history.

They are slowly restoring the parts of the building that disintegrated over the years and they hope to have a museum there in the near future showing all the artifacts that were removed from the site.  Obviously wood and delicate materials have disappeared over time.  I gather money is a huge problem in Italy in general for everything from garbage removal to restoring old buildings.  We ate at a really good restaurant near these ruins.  It was called Trattoria La Ruota and is Michelin recommended.  Delicious lunch in a rustic old building.

We also visited Mount Etna which let off a whole lot of steam about two weeks before our arrival.  The top was shrouded in cloud the day we were there, but the lava from a recent – 2016 – is very obvious, still blocking parts of the road.  They actually had a ski resort on the mountain and it was totally destroyed.  The road disappeared under millions of tons of black lava and we had an interesting drive through the forest to get to where the ski resort used to be.  You can still see parts of the old ski lift here and there up the mountain.  Unfortunately it was a cloudy wet day and we could not see Mt Etna.

We made chocolate in Modica, and had a cooking class in Taormina.   We had great weather with a couple of exceptions.  One of those days, in Erice, it rained and thundered and we jumped out of our skins and put away our umbrellas as lightening hit very close to us with a huge clap of thunder you could feel inside your body.

I learned how to make macaroni, caponata – a delicious antipasto – and tasted wonderful Marsala and learned you don’t only use it for cooking!!  Also that chocolate is made using Aztec methods.  How to choose a fresh fish.  And how you can tell a ‘farmed’ fish from a ‘wild’ fish?  Look at the tail.  The farmed fish will have tails that are damaged because the other fish eat them.  Also, Gluten-free products and meals were available in every restaurant and the products were delicious.  Olives & grapes, and sometime oranges grow here in abundance.  The biggest market for their olive oil  is Japan, followed by the US and Canada.

My favourite city was Taormina.  It is beautifully situated high on the cliffs overlooking the Ionian Sea across to Calabria, a short boat trip away.  I would go back to Taomina in a heartbeat.

If you are planning a trip to Sicily, you might want to check out the most famous policeman in Italy.  His name is Inspector Salvo Montalbano.  He was created by Andrea Camilleri, the country’s most successful writer.  There are 20 Montalbano books and the Montalbano TV series is viewed by millions around the world.  The series is set in Sicily, mostly in the Ragusa area, and his TV beach house is known as Casa di Montalbano and operates as a B&B today.  You will regognize many locations around Sicily as you read or watch the stories unfold.

Finally, I could not write about Sicily without mentioning Cannoli!  The delightful pastry that consists of tube-shaped crispy, fried pastry and filled with a sweet creamy ricotta based filling. They can be decorated with nuts, fruit and chocolate.  They were invented in Sicily and come in many sizes from tiny finger sized to the huge fist-sized you find in Palermo.  I learned they were originally made only during Carnival time and were considered a fertility symbol.  Today they are eaten all year round and come in different flavours.  Chocolate with chopped pistachio was particularly yummy!!   Ciao!!