I didn’t expect to love Cartagena.  I wasn’t sure what to expect.  But it is a wonderful, colourful city with a beautiful juxtaposition of old and new and an exciting past of pirates and silver and yes drug wars, but that seems to be past now.

When the son of a friend of mine went to live there a couple of years ago, I remember asking her if she was worried about whether he would be safe there.  One has this feeling of political unrest and drug problems.  But I saw no evidence of that.  As a matter of fact, I felt totally safe.  The people are warm and friendly and are happy to have the tourists coming to visit.

Cartagena is an old port.  It is one of the largest in South American and it was founded in the mid 1500s.  It was the main port between Spain and its overseas empire and a key for the export of Peruvian silver and African slaves.  Cartagena has a population of around one million people and is the 5th largest city in Colombia.  Maritime and petrochemical industries as well as tourism drive the economy.

The export of silver made it an obvious target for pirates and corsairs.  (Corsairs were authorized by France to conduct raids on ships on behalf of the French crown.  A Corsair captain was entitled to a portion of the proceeds, and if captured they could claim better treatment as  ‘prisoners of war’ rather than pirates).  Hence the building of the old fort, San Felipe, and the walled city.  Construction of the walls began in the late 1500s.  They were built in many stages, and were designed to protect the city from continual pirate attacks.

Today Cartagena is a vibrant, colourful city and our guide told us they relate more to the Caribbean than to Colombia.  They are located on the Caribbean coast.  There are fruit sellers who dress in colourful costumes – reminiscent of the Caribbean islands –  to sell their wares.   Lots of colourful buildings, art and folk art.  Emeralds of course!!  The old town has streets of cobblestone and there are flowers everywhere on the old colonial buildings, and beautiful old churches.  The current pope visited here in August 2017 and everyone is very proud of that fact. 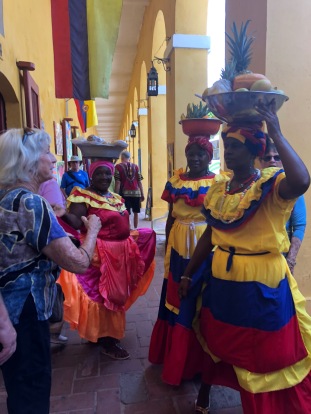 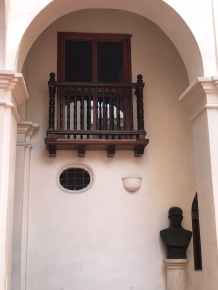 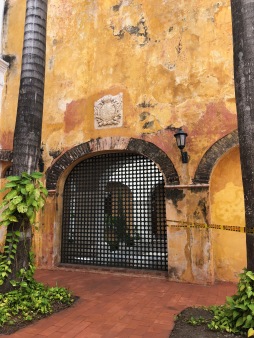 The old buses that were once used for transportation throughout the city are now painted in colourful patterns and pictures and used to transport tourists. 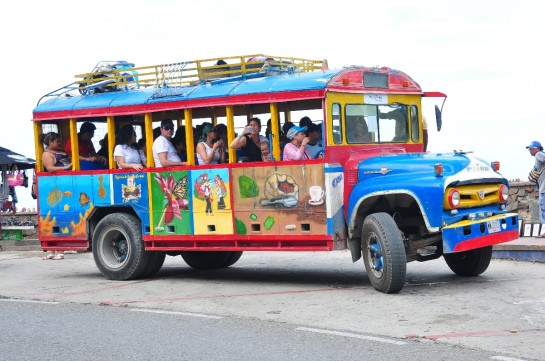 The weather was hot and very humid, but I would definitely return to this city to explore more of the old area and get to see the new city up close. The turquoise sea with its many beautiful beaches which adds to the colour.  It is just a beautiful, vibrant city with lots of history and lots to see and do.