It’s not the first time I have travelled through the Panama Canal, but this time I had the best cabin to do so, right at the front of the ship.  So of course I had a Panama Cabin party and a whole bunch of us celebrated with mimosas and pastries.  We had a bird’s eye view and a lot of fun.

I also learned many facts about the “ditch” as it is affectionately called.

It takes approximately 8 hours to transit the 77 kilometers between the Pacific and the Atlantic.  It is made up of 6 locks  – three at each end, and the man-made Gatun Lake in the middle, created by damming the Chagres River.

Construction first began by France in the late 1800s, but was abandoned because of the huge loss of life – over thirty thousand people died, mostly of malaria and yellow fever.

The USA took over the project in 1904.  They paid $50 million for it with $40 million going to France and $10 million going to Panama.  In today’s dollars that would amount to around $1.3 billion.  They opened the canal in 1914 after putting in an additional $400 million dollars.  In 1977 the Panama Canal Zone was put into place and the canal was managed jointly between the US and Panama.  In 1999, the canal was taken over solely by the Panamanian government and operated by the Panama Canal Authority. 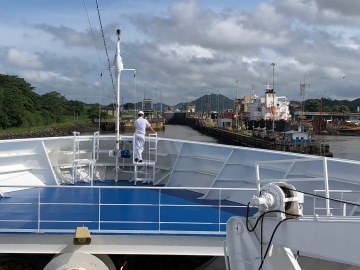 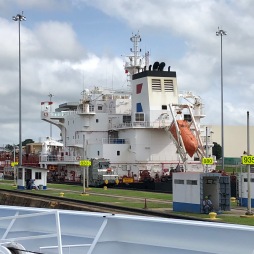 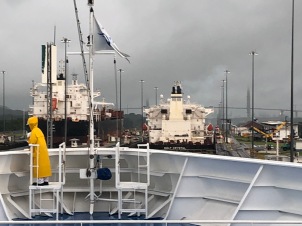 The cost of transiting the canal is approximately $200,000 per ship and there are two options.

One, is on a first come first serve basis, which is how the canal has historically operated.

Two, you can book for a fee – 15% over original tolls – and this guarantees a specific day within 18 hours or less.  The Panama Canal sells 24 of these daily slots and they can be purchased up to 365 days in advance.  Within this second option, they also have made available a 25th slot, which is sold to the highest bidder.

There are between 13 and 14 thousand ships per year that transit the canal.  That means approximately 40 ships per day.  The most expensive transit?  Three hundred and seventy five thousand dollars for one way by Norwegian’s Bliss.  Bliss is a very large cruise ship with over 4000 passengers and 20 decks.  I can’t fathom how much money Panama makes from the canal passages.

Could there be competition in the future for the Panama Canal?  The Suez Canal offers some competition, and the Chinese have stated they would like to build a canal through Nicaragua, but nothing has come of that to date.  And there are the northern passages – with global warming, Canada’s Northwest passage becomes more of a possibility, as does the Arctic Bridge linking Russia and Canada.

The “mules” that guide the ships are interesting also.  They do not “pull” the ship through the canal.  The ships operate under their own power.  But they do keep them from running into the walls of the locks.  There is precious little room between the walls and the sides of the ships.  The mules or engines are also very costly to purchase at aroud one million per engine.

Really interesting day!  And lots of fun too!  And then it rained!! 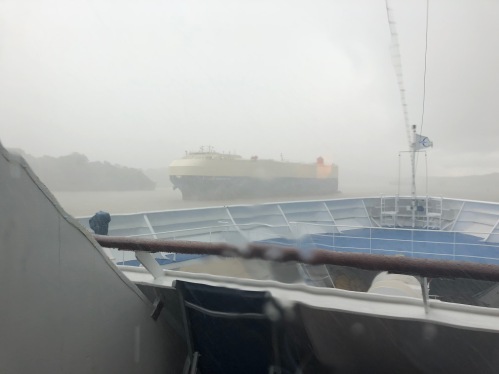