After three days tearing across the Tasman Sea, we arrived in Auckland on New Zealand’s north island on May 13.  Since no tours were planned for that day, a few of us decided to do the HOHO bus and learn a little about the city.  New Zealand is made up of three islands – North, South & Stewart.

Auckland is the largest city in New Zealand with a population of approximately 1.3 million.  New Zealand itself has a population of about 4.2 million people.  The capital is Wellington.  But Auckland is the country’s major gateway for shipping and air traffic.  It is called the “City of Sails” because of its location between two harbours, great fishing and great weather.  Twenty percent of the population own a boat.  There are thousands of marinas and a huge boating industry.  People come from all over the world to have their boats refitted. 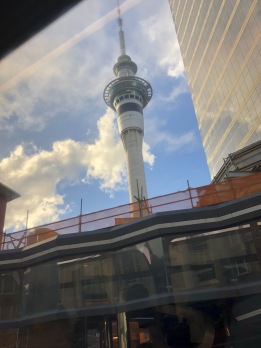 From our ship I see what looks like a modern downtown with high-rises and a CN Tower-like structure called Sky Tower, which has a revolving restaurant and we will be going there tomorrow for our last Around the World special event.  Yes, last special event.  We are on our way home. 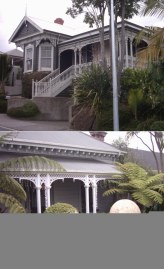 But just a few blocks out of the downtown area, and it feels like you are in a small town with lots of old colonial type clapboard house and small businesses.  The houses are finished with porches and gingerbread trim and mostly painted in light colours.  They are really beautiful and are reminiscent of the Queenslander houses in Brisbane.  There are lots of parks and green areas here as well.  Again, much like Toronto.

We learned on the HOHO bus that New Zealand sits on a line of volcanoes.  It is the only city in the world that is built on a basaltic volcanic field that is still active.   There are 50 volcanoes in Auckland and there are cones you can see around the city.  Most of these cones have been made into parkland or form lakes and basins in the city.  The last eruption in Auckland was 600 years ago.

New Zealand lies within the earthquake-generating collision zone between two of the Earth’s great tectonic plates, the Pacific and the Australian.  As a matter of fact, they meet right in the middle of New Zealand.  The Australian plate moves north to Japan and the Pacific moves east toward the west coast of the USA.  The San Andreas fault is part of the same plate.  The southern island has more earthquakes, and in 2010 Christchurch was devastated and has still not completely recovered.  Small earthquakes occur daily and the people just live with it.

The tour also included the ferry over to the island, so we hopped on over to Devonport.  Quaint little place with lots of shops. Wandered around, ran into some friends from the ship, had a drink at the local hotel and made it back in time for fireworks over the harbour from my cabin.  Great day! 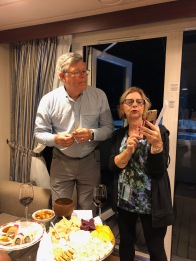 Next day we had a lovely lunch at the tower and then some of the crazy people on this ship decided to do the jump off the tower.  Not me.  I am basically a coward.  It is sort of like a bungy jump, but slows right down to set you softly on the ground.  No bouncing up and down.  Still not me!

Great two days in a lovely city with lovely people.  Kiwis are the friendliest and have a great sense of humour.  Also there seems to be a little ‘rivalry’ between Aussies & Kiwis!!  Am I right?

This beautiful 50 hectare park belongs to the Maori.  It is called the Michael Joseph Savage (1872-1940) Memorial Park.  He introduced welfare and also helped the Maori with equality and  land redress issues which allowed them to retain ownership of this beautiful park. With Maori suport Labour won and it was the begining a a long-standing relationship.  Fast forward,

Donald Trump came to town and wanted to buy this land and turn it into a hotel/casino/golf course and offered a very large sum of money. The Maori turned him down.  Then he gave them a blank cheque and told them to fill in whatever amount they wanted.  They gave him back his cheque untouched.  Smart people!