Translated Kuching means cat in Chinese.  And there is big evidence of cats all over this city.  They even have a cat museum.  I know a lot of people who would love this place including Linda B and my niece Stephanie.   Along with cats, this city is thoroughly charming and easy to like, with people who are smiling, friendly and open.

The Kingdom of Sarawak was a British Protectorate located in the northwestern part of the island of Borneo.  Sir James Brooke was ceded this city for his help in quelling a rebellion.  He became the first White Rajah and in 1841 Kuching became the capital of Sarawak.

The town continued to develop under the rule of Charles Brooke, Sir James’ nephew, who constructed a sanitation system, hospital, prison, fort, and a bazaar.  During World War II, from 1942 to 1945, Kuching was occupied by Japanese forces.  Fortunately, the town survived intact.

However, the last Rajah of Sarawak, Sir Charles Vyner Brooke, decided to cede Sarawak back to the British Crown in 1946.  Kuching remained as capital during the Crown Colony period.  After the formation of Malaysia in 1963, Kuching retained its status as state capital and was granted city status in 1988.  Today, Kuching City is divided into two administrative regions – north and south –  headed by two mayors.  The official religion is Muslim.

I found this excerpt from a book, My Life In Sarawak, written by Margaret Brooke, wife of Charles.  I felt she could be speaking of the city today –

“ The little town looked so neat and fresh and prosperous under the careful jurisdiction of the Rajah and his officers, that it reminded me of a box of painted toys kept scrupulously clean by a child. The Bazaar runs for some distance along the banks of river, and this quarter of the town is inhabited almost entirely by Chinese traders, with the exception of one or two Hindoo shops….Groceries of exotic kinds are laid out on tables near the pavement, from which the purchasers make their choice. At the Hindoo shops you can buy silks from India, sarongs from Java, tea from China and tiles and porcelain from all parts of the world, laid out in picturesque confusion, and overflowing into the street “.

Margaret Brooke could have been speaking of this area today, and I loved walking through the busy buzzling bazaar in Chinatown which looks just like she wrote.  Here we visited a Chinese temple and then went on to the Sarawak State Museum.  It is the oldest museum in Borneo and was established in 1889 by Charles Brooke.  During the Japanese occupation it was directed by a Japanese officer who was sympathetic to its goals.  He protected it and the museum suffered very little damage or looting.  It displays archaeological artifacts, and examples of the life of the indigenous peoples and their art and crafts.

Unfortunately it is undergoing a huge renovation at the moment and so was not fully open.    It is a World Heritage site and as such the workmanship must reflect the era in which it was built to keep the designation.  There was a small area still open where we could see some of the history of the area complete with headhunter trophies and art. 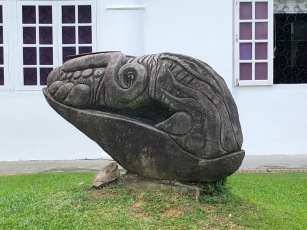 I was amazed to see the similarity to our West Coast Native art on display here.  Drawings, shields, carvings and “totem pole-like” structures which are really death poles where the body is kept in the square “coffin” above the ground.  This art says to me that if one digs far enough, we must all come from the same place, we are all one and connected.  I noticed this in Africa also.  Too bad this old world doesn’t seem to get this concept.