Our ship docked at 10 am in Singapore and by 10:30 we – Suzanne, Kat and I – were off the boat.  I had been here a couple of times, once many years ago with Chris Burstow, and again in 2010 with the Beer’s, the year the Marina Bay Sands Hotel opened.  So we decided to do our own thing here.

First we took the cable car over to Sentosa Island.  New to me.  Thirty dollars each and a five minute cable car ride later, we were on the island only to find out there is no where to go but back again.  Unless you wanted to play around at the water park.  It’s like a big wet Canada’s Wonderland.  The return ticket did take us two stops farther to Faber Peak, so we stopped and enjoyed the view and drowned our woes in beer and sweet potato french fries with curry mayo. Like, they don’t feed us onboard Insignia!! 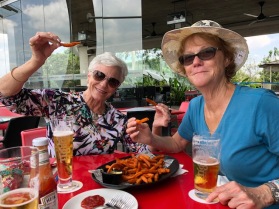 Next, after trying to find the HOHO bus at the cruise terminal area with no success, we took a cab into the Marina Bay Sands Hotel and picked up the bus there.  But by mistake we got on the Yellow line,  instead of the Red line which took us to where we really wanted to go –  Chinatown.  One would think we had never travelled anywhere before.

We completed the Yellow line circuit and then switched over to the Red line and we were on our way to Chinatown where there is a One star Michelin Hawker restaurant.  First of all there was construction at the stop, so it was moved and we had to find our way back to Chinatown through someone’s back yard I think.  In any case we found Smith Street and started looking for the Michelin starred  Hong Kong Soya Chicken Rice Restaurant…..  and when we finally found it, you guessed it, it was closed for renovations. 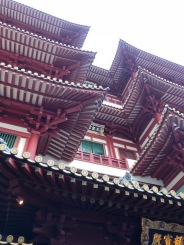 So we opted for Fatty Weng’s restaurant in the same neighbourhood and had an excellent Peking duck instead.  After that we hit a couple of temples –  one we thought we didn’t have to take our shoes off, and so – red faced – we got kicked out.  Beautiful temples though.  Both of them.  Frustrated we decided to catch the Red HOHO bus back to the Marina Bay.

We waited for awhile and no bus came.  Then someone told us the last bus had already gone by at 5:30.  It was now close to 6pm.  Inveterate travellers, we are still smiling.  Sort of.   So we decide to take a cab back to the Marina Bay  so we can go up to the top and see the view, the negative edge pool – see above, the light show and have a nice drink and relax.

When we get to the hotel, we find that the whole top floor has been reserved for a private party and no one was being allowed up there.  Even Raffles was closed for renovations, so a Singapore sling at the bar where it was invented was impossible.   So we gave up at this point and went back to the ship.  So there!!