BURMA  OK, OK   So it is now called Myanmar – but that name doesn’t let me conger up romantic images while singing…. “on the road to Mandalay, where the flying fishes play, and the sun comes up like thunder out of China cross the bay….”

We were delayed getting out of India and slowed down again by weather causing us to miss the whole first day in Rangoon – read Yangon now.  Some people were able to go out on a night tour of Yangon, but since my wake up call for my flight to Bagan was at 2:45 AM – I decided to play it safe and stay on board, pack and make it an early night.  I was not about to miss Bagan for any reason.  Myanmar was one of the reasons I booked this cruise.  And I was not disappointed.

Our drive from the airport was in darkness, but every once in a while a beautiful gold pagoda popped out of the dark sky.  The flight to Bagan, located southwest of Mandalay on the Irawady River, was 1 1/2 hours, so by the time we landed there the sun had come up.  We went directly to a old market and then began a tour of some of the most incredible sights I have seen so far.

Bagan was capital of an ancient Burmese empire dating back to the 9th century.  There are thousands of stupas or pagodas scattered all over the land near Bagan.  Most of them were built in the 11th and 13th century and make up one of the largest concentration of temples and pagodas in the world.  Unfortunately, this is an earthquake zone and over the years many have been damaged or even destroyed by earthquakes – most recently in 2016.  Their reddish brown appearance and intricate brick work are at once one with the landscape and aesthetically so pleasing to the mind and eye.  The vast site is Myanmar’s national treasure and premier tourist attraction today.

I had to look up in the dictionary the difference between a stupa and a pagoda and this is what I found – Pagoda is a Buddhist temple typically in the form of a many tiered tower, and – Stupa is a dome shaped building erected as a Buddhist shrine.  I think I heard on our tour also, that you can walk into a Pagoda, but a Stupa is solid. 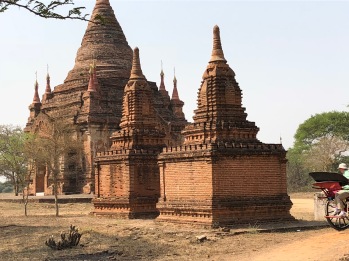 Nominated in 1996 to become a UNESCO World Heritage site, one wonders why this has not already happened.  Certainly the government of Myanmar would like this to happen and have applied for such.  Many criteria come into play, not the least of which is or was the political situation in Myanmar until recently, and also the fact that repairs over the years have been made to damaged buildings using restoration methods and modern material that did not conform to keeping the site as original as possible.  Apparently UNESCO is now working with local archaeologists to assure this type of unsatisfactory work does not continue.  Another positive is the banning of climbing up on these structures to view the area and sunsets & sunrises.  Personally, I hope this designation happens sooner rather than later.   The country is poor and struggling and the financial assistance that comes with this designation would indeed be beneficial in keeping this remarkable area in tact for generations to come.  Many see this area as equal to Angkor Wat in Cambodia.

The area is breathtaking and it is like dropping back a few hundred years.  It was not that long ago that people lived and farmed amid and around all these beautiful buildings.  Recently, however the government has moved these people to homes and given them land so they can continue to farm,  leaving the temples and pagodas to sit as they have for centuries.  Speaking of the people in the area, they smile easily and are charming and friendly with a quiet demeanor.   And although they have learned that the “tourists” will spend money on what they have to sell, they are pushy in a gentle sort of way that makes one smile rather than become annoyed.

One fun part was travelling amongst these beautiful structures via horse and cart.  I was somewhat surprised that tourists are able to walk in and out and through the temples with little control as to what we could or could not touch.   Thankfully in our group everyone seemed to be very respectful of these precious buildings. 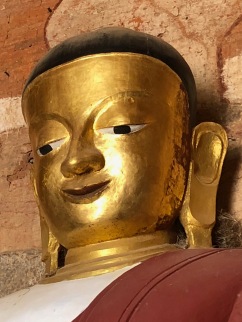 I loved seeing the variety of buddhas, and the rare old paintings and drawings on walls that should be protected.  Some have been damaged by the earthquakes and apparently others covered with a whitewash that was applied to “clean up” the interiors.  Hopefully UNESCO if it decides to get more involved will be helpful with the restoration and preservation of these treasures. 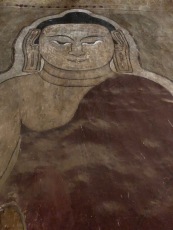 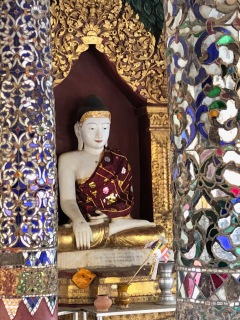 We were all looking forward to seeing the sun go down over the temples.  Now that one cannot climb on the them, the army has constructed a tower to view the area.  It looks out of place as a modern structure, but if it keeps people off the temples then I suppose  that’s a good thing.  Unfortunately, at this time of the year the sunsets are not very spectacular and so we missed that “iconic” shot.

Another highlight of our trip was dinner, outside, under the stars,  by a beautiful pagoda, lit up with candles and little campfires.  The food was typical of the area and delicious.  At one point we were entertained by an “elephant dance”.  A beautiful “elephant” in a wonderful costume appeared out of the darkness and danced for us to local musicians.  It was magical.  One of our group was celebrating a birthday that day, and they even surprised her with a birthday cake, candles and all. 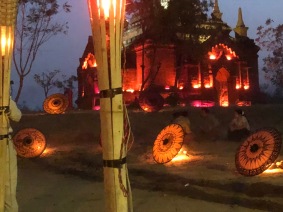 Our hotel, Began Lodge, was modern and comfortable.  The rooms were beautiful and well appointed.  It is typical of the many new four & five star accommodations that are popping up in this area.  The contrast between the lovely old pagodas, and the old markets, and the new hotels is striking.  The next morning during breakfast, there was a stream of hot air ballon that floated overhead.  I thought that would have been a wonderful way to view the area.  Next time I guess.