We arrived in Cairns, Queensland on the east coast,  with enough time to explore by night.  Most of the stores closed at 9 pm, but there was a night market and of course lots of bars and restaurants.  The night market turned out to be just lots and lots of “touristy” stuff, but it was fun to get off the ship and walk around and we all decided to go back to the ship and bed to be rested for our all day tour to the Great Barrier Reef, one of the severn natrural wonders of the world.

The catamaran ride to the reef was about 90 minutes and there in the middle of nowhere was this floating platform with sun beds, restaurant, bar, glass bottom boat, semi submarine, snorkelling, scuba and snuba.

I did everything except scuba.  My c-card has expired and so i am not able to dive.  However I did do snuba which allows you to get down to about 30-35 feet attached to an air hose and regulator.  Not as free as scuba, but still  a great experience.  I hugged a huge wrasse named Wally.  He is the platform’s “pet fish”.  The coral didn’t appear to me to be beyond help as we have heard at home.  There were some areas that looked bleached, but it was mostly the stag horn coral.  The reef people said it wasn’t a bad thing, as the softer corals need the base that the dead stag horn provides for stability.  I hope they are right.

It was a full day of water sun and boating and I was tired, fell asleep, missed dinner and probably needed the rest more than the food.  (I keep a little wine and snacks in my room for just such occasions)!!!  So I was good!!

Cairns was founded in 1871 to serve the miners heading for the Hodgkinson River goldfields.  It declined after an easier route was discovered and more recently has become a popular tourist destination because of its tropical climate and nearness to the Great Barrier Reef.  And again, the war.  Allied Forces used Cairns as a staging base for operations in the Pacific.

I didn’t have a tour booked in Townsville and I have been promising Sho, my trainer, that I would take him out for lunch one day in one of our ports.  So today was the day, because he is leaving us in Sydney.  I found a restaurant called the Watermark and it was lovely.  Right on the water with great views across to Magnetic Mountain.  We ran into Pat & Lou from the cruise ship.  Coincidentally Pat is also one of Sho’s clients, so we joined them for lunch.  I had the best jumbo scampi I have ever eaten.  And a good Australian white wine called Delatit.  It probably never makes it to Canada, but I will look when I get back home.   I also found out no one tips in Australia. 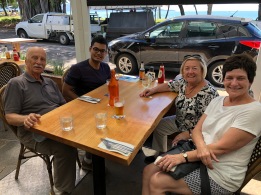 The town itself is a lovely, clean and I thought realitively new city.  But our taxi driver told us it just celebrated its 150th anniversary.  So it is as old as Canada.  It too was a major staging point for troops during World War II.

Back at the ship, it was dinner with Daniel & Alexandra our entertainers and social hosts.  Two great people with great talent.  We had a lot of fun and wine and laughs. It is really special to get to know these lovely young people, and I know one of these days when I am in New York I am going to go to a musical and find them starring. We are lucky because we get invited to more dinners with the officers and the entertainment crew.   So much fun, but I think their wine allowances must be getting strained!!